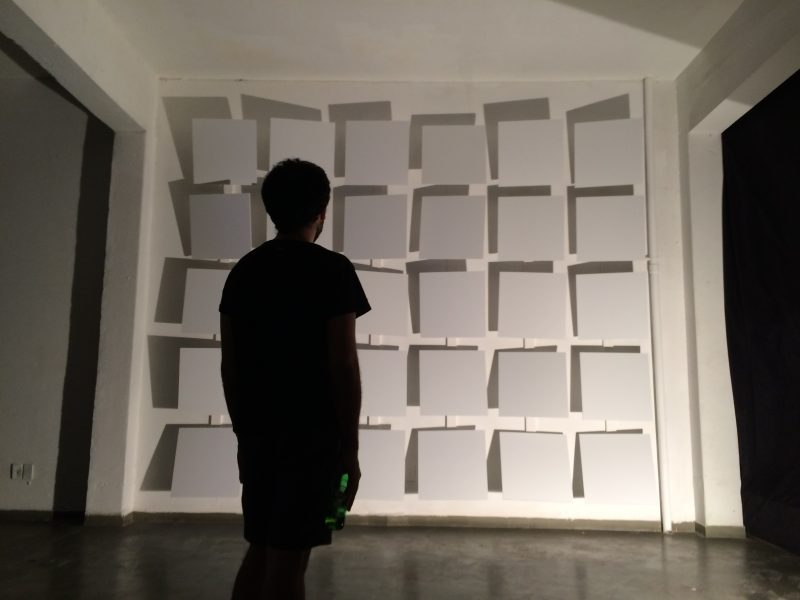 Mike Rijnierse (1974) is a Dutch artist, performer and educator working in the fields of light, sound and architecture. He is intrigued by sensory experience, whether visual, acoustic, spatial, or cross-sense and synesthesia, creating installations, performances, and public interventions, often collaborating with other disciplines.

‘Relief’ is an installation based on the principle of echolocation by means of ultrasound. Mounted on a wall, this sculpture is not primarily designed to be gazed at, but to be listened to. The work examines the process of hearing, decomposing reflections of the space that inform orientation, emphasising the relationship between source and receiver. RELIEF is therefore not a sound sculpture, but an echo sculpture. As architect Juhani Pallasmaa wrote in ‘The Eyes of the Skin’:

“Sight isolates, whereas sound incorporates; vision is directional, sound is omni-directional. The sense of sight implies exteriority, whereas sound creates an experience of interiority. I regard an object, but sound approaches me; the eye reaches, but the ear receives. Buildings do not react to our gaze, but they do return our sound back to our ears.”

Relief was created in collaboration with artist Rob Bothof. Relief is realised with the kind support of TodaysArt and Stroom Den Haag.

‘Soundman’ is a sculpture based on sound reflection. A satellite dish polished to a mirror reflects the whispering sound of a plastic tube dancing on airflow, generating an unpredictable composition of sound and image. Soundman refers to the Soundman-cyclus (1981-1990) by Dick Raaijmakers. This work was inspired by Night Owls (1930), the first sound film by Laurel and Hardy. In this movie Laurel and Hardy are two burglars trying to enter a house. Almost all the sound that they produce in the middle of the night while trying to pass an obstacle, is explicitly followed by a ‘…shhh!…’. Particularly in their first sound film, Laurel and Hardy leave the biggest part of the twenty-minute costly soundtrack deliberately unused. A sublime interpretation of sound film.

Mike Rijnierse is currently a resident at Crossing Parallels, a platform for artists and scientists initiated by TU Delft and TodaysArt.